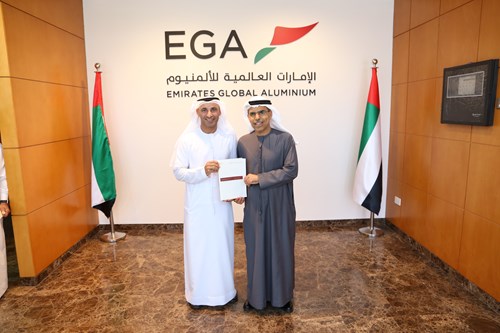 Young UAE Nationals pursuing EGA’s mechanical, electrical and instrumentation technician training programmes will soon be able to get qualifications that are recognised in Dubai

Three of EGA’s National Trainee Apprenticeship Schemes for young UAE Nationals will lead to the qualifications. The programmes are for UAE Nationals starting careers as mechanical, electrical and instrumentation technicians.

EGA has been running the three National Trainee Apprenticeship Schemes since 1982 and has graduated over 500 technicians since then. Many have gone on to pursue successful careers at EGA and other industrial companies in the UAE, but they have not previously received recognised qualifications.

Dr. Abdulla Al Karam, Chairman of the Board of Directors and Director General at the Knowledge and Human Development Authority (KHDA), visited EGA’s Technical Training Institute at Jebel Ali to formally confer the Educational Permit, accompanied by Dr. Naji Almahdi, Chief of Qualifications and Awards at KHDA. They were received by EGA’s Managing Director and Chief Executive Officer Abdulla Kalban.

Dr. Karam said: “By encouraging skill development and recognising qualifications we are working towards developing human capital that meets the needs of our knowledge economy. This important milestone will count towards the development of our national workforce and create new opportunities for UAE’s youth.”

Mr. Kalban said: “EGA’s performance and growth is driven by our workforce, so we have spent decades focusing on training and development. Apprenticeship schemes for UAE Nationals are a key way to attract young people into our industry and prepare them for vital technical roles. Licensing is recognition of the quality of our apprenticeship schemes in developing talent for our own company and to build our national human capital.”

EGA’s management training programmes are already accredited by the Institute of Leadership and Management, a part of City and Guilds, a global accrediting body.

Around 2,500 staff attend management training courses at EGA each year, from graduates to executive leaders.

EGA has 30 trainers who provide technical training for staff at all levels on the company’s operational sites, including for apprentices on the three apprenticeship schemes and others that EGA runs.

EGA employs around 7,000 people in the UAE including almost 1,200 UAE Nationals.

More than 40 per cent of those holding the top 280 positions in the company as well as more than a third of the more than 1,800 people in EGA’s supervisory positions and above are UAE Nationals.