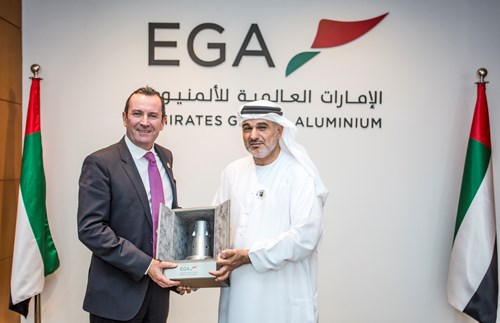 The delegation was hosted by Dr Ali Al Zarouni, Executive Vice President of Midstream Operations at EGA, and discussions revolved around the development of trade relations between EGA and the state of Western Australia. More than 60% of the company’s bauxite is imported from Western Australia, and H.E. Mark McGowan expressed his desire to continue to grow the relationship with the company.

The delegation was taken on a site tour of the EGA smelters in Jebel Ali. All of the officials in attendance expressed great admiration for the progress of operations, and the care taken in ensuring environmental protection, as well as the safety of employees.

As a world leader in the aluminium industry, EGA enjoys strong business relationship internationally. The company is the world’s largest ‘premium aluminium’ producer, making EGA the third largest producer of primary aluminium outside China. As a result, it routinely hosts government and trade delegations

Dr Ali Al Zarouni said: “We already enjoy a close relationship with the Western Australian government, and look forward to benefiting from its rich development experience. We’d like to extend our gratitude to the Hon. Mark McGowan for his delegation’s visit, and are confident that this will help us build fruitful partnership relations at both the governmental and private levels across the state of Western Australia.”

EGA continues to invest in developing its smelter technology and is at the forefront of innovation in the industry, with demonstrated and growing use of technologies such as robotics, machine learning and advanced analytics supporting continuous improvements in operating performance.