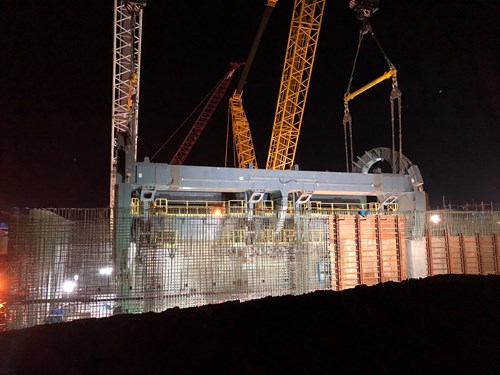 First bauxite exports expected during the second half of 2019

United Arab Emirates, 11 December 2018: Emirates Global Aluminium, the largest industrial company in the United Arab Emirates outside oil and gas, today announced that its bauxite mining project in the Republic of Guinea has reached 75 per cent construction completion.

The project has a total budgeted project cost of approximately $1.4 billion and is being developed by EGA’s subsidiary Guinea Alumina Corporation. It is the largest greenfield investment in the West African country in the last four decades. First bauxite exports are expected during the second half of 2019.

Almost 3,000 people, of whom more than 80 per cent Guineans, are currently building the GAC project. The project has taken some 23 million man hours of work so far, the equivalent of one person working for some 18,000 years.

GAC has recorded almost 9 million man hours of work without a Lost Time Injury. The total recordable injury frequency rate at GAC for the year to date is 0.8 per million hours worked, less than a quarter the International Aluminium Institute’s global benchmark for bauxite mining last year.

Abdulla Kalban, EGA’s Managing Director and Chief Executive Officer, said: "We are now entering the final phase of construction of our project in Guinea and the team in Guinea is focused on achieving ‘First Ore On Ship’ safely, responsibly, on time and on budget. Whilst construction continues, work is also progressing well on preparations to operate the mine and export facilities efficiently for the benefit of Guinea and EGA for decades ahead.”

Guinea is the world’s largest bauxite resource holder, and EGA’s project will contribute significantly to the country’s exports of the ore from which aluminium is derived. Once full ramp up is achieved, the project is expected to produce some 12 million tonnes of bauxite per year.

Bauxite from the GAC project will be sold to aluminium producers around the world.

The Guinea project is part of EGA’s strategic drive to expand its business upstream and internationally, building on the company’s decades-long heritage in aluminium smelting in the UAE. In addition to the GAC project, EGA is building the UAE’s first alumina refinery in Abu Dhabi. Alumina refineries convert bauxite ore into alumina, the feedstock for aluminium smelters.

GAC's concession is located in the Boké region of north-western Guinea, close to existing mines that are operated by other companies.

Bauxite will be transported by rail to the coast, using existing railway lines that are already used by other companies. GAC has completed rail loops, and spur to connect its facilities to the existing nearby track.

GAC is also building port facilities including an unloading yard and an export pier at Kamsar, a well-established bauxite port on the coast.

During the operational phase, the project is expected to directly employ some 400 people, in addition to about 400 subcontractors. GAC also invests in supporting communities near its operations, addressing issues such as health, education and training.