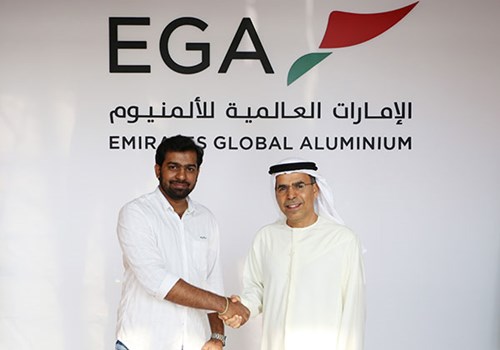 United Arab Emirates, 27 September 2017: An operations employee at Emirates Global Aluminium, the largest industrial company in the United Arab Emirates outside oil and gas won Safety Idea of the Year, at Ideas America 2017, an annual awards programme that recognizes people for engaging with their work in creative and outstanding ways.

The winning submission for Safety Idea of the Year was developed by Dileepan Soundararajan, who works in Casthouse Maintenance at EGA in Al Taweelah, performing preventative maintenance in areas where hot metal is turned into aluminium products.

Mr. Soundararajan, who has worked for EGA since 2013 and is from India, offered a solution to a potential safety risk posed by heavy equipment that is used to tilt aluminium slabs on-site. His idea was implemented in 15 November 2016 at EGA’s casthouse in Al Taweelah in Abu Dhabi.

EGA has operated an employee suggestion scheme for more than 35 years. Since 1999, EGA employees have submitted over 220,000 actionable ideas, saving the company more than AED 250 million.

EGA employees share in the financial benefits of their ideas that are implemented by the company and result in cost savings.

Mr. Soundararajan said: “It’s such an honour that my idea has been recognised internationally. I shared my suggestion for the casthouse because I wanted to make my colleagues and employees even safer at work. I never imagined that it would be singled out anywhere else in the world.”

Safety is the first priority for everyone at Emirates Global Aluminium, no matter their role in the organization. Zero harm to staff, contractors and neighbours is the only acceptable target.

In 2014, EGA’s Al Taweelah smelter set a record when it achieved more than 16.2 million operational work-hours without a single lost-time incident, the equivalent of one person working more than 7,000 years without an accident.

EGA’s employees brought home top honours in other categories, picking up bronze in the Individual Idea of the Year and Green Idea.

EGA has won 48 different awards at Ideas America since 2002.

Abdulla Kalban, Managing Director and Chief Executive Officer at EGA, said: “We believe that often it is people closest to a problem that can both identify it and work out the best solution. For us, involving everyone is the best way to continually improve. Recognition at events like Ideas America is fantastic for individuals, but is also a tribute to the dedication and ingenuity of everyone at EGA.”