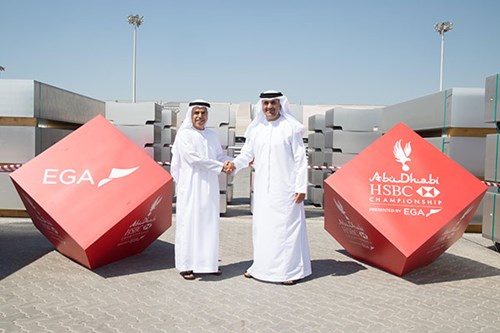 Abu Dhabi, UAE 17 October 2017 : The award-winning Abu Dhabi HSBC Championship, which each January launches the Desert Swing as part of the European Tour, has been renamed following a landmark presenting partnership deal with Emirates Global Aluminium. EGA is the largest industrial company in the UAE outside oil and gas and one of the world’s biggest ‘premium aluminium’ producers.

The tournament, held at the showpiece Abu Dhabi Golf Club, will now be known as the Abu Dhabi HSBC Championship presented by EGA.

The deal means that EGA is now backing both key UAE championships on the early-start Desert Swing – the other being the Omega Dubai Desert Classic. EGA is the only company to sponsor both events.

Abdulla Kalban, EGA’s Managing Director and CEO, said the partnership is a way for EGA to contribute further to the development of the UAE.

“Golf has played an important role in putting the UAE on the global map, spurring tourism as well as improving the quality of life of UAE residents. This is why EGA has supported the development of world-class golf in the UAE since 1991. With this new partnership in place, we look forward to the country’s iconic golf tournaments making further contributions to the nation’s economy and society.”

“We have been working behind the scenes for some time to secure strong, local support for the Championship to allow us to expand its reach. This deal brings significant benefits to the tournament, our new partner and the UAE community at large. It gives us more resources to yet again improve the overall spectator experience, will deliver greater local, regional and international exposure for EGA and further bolster our efforts to boost the golf following here in the UAE and to our valuable visitor base.”

The Abu Dhabi tournament has gone from strength-to-strength since its launch in 2006 this year attracting the strongest field of the European Tour season outside the Majors and World Golf Championships.

“We have consistently attracted the game’s biggest names including the likes of Dustin Johnson, Rickie Fowler, Rory McIlroy, Jordan Spieth, Henrik Stenson, Phil Mickelson and Tiger Woods and we plan to maintain the calibre of field,” said Al Awani. “We have also, together with the unwavering eight-year support of our headline supporter HSBC, built an off-course offering which is the envy of many and a significant draw in its own right – we hope to enhance this further with EGA’s backing.”

The 2018 Abu Dhabi HSBC Championship Presented by EGA will run from January 18 – January 21 with Abu Dhabi Sports Council looking to top this year’s turnout of over 69,000 spectators. The 2017 tournament grew the championship’s social media following by over 65% and reached a potential global TV audience of almost half a billion people looking to watch the world’s best vie for the coveted Falcon Trophy and a share in the US $2.7 million prize purse.

Abdulfattah Sharaf CEO of HSBC UAE added: “Our long-term commitment to this great tournament started with the desire to drive the game forward and further inspire a new generation of golfers to discover the sport in the UAE and the region. We believe in EGA, we have a partner who shares our vision and desire to inject even greater levels of excitement and energy into what is already the jewel in the crown of Middle Eastern golf.”

He added: “Abu Dhabi has become known as the start of the global golfing season and is now one of the most important events in world golf. We are confident that our commitment to this great tournament will continue to drive the game forward. By offering world class sporting entertainment for the entire family on and off the course we aim to introduce even more people to this wonderful game and make golf even more accessible. This new partnership provides a spectacular start to the 2018 Championship build-up and alongside Abu Dhabi Sports Council, we are thrilled to welcome EGA as partners.”