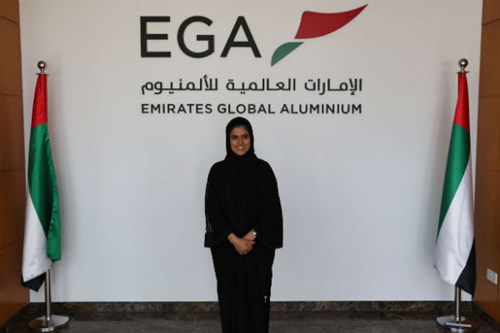 Abdulla Kalban, Managing Director and Chief Executive Officer at EGA, said: “EGA employs 7,000 people in the UAE and it is important to us continually to recruit the best people for our future. I welcome these ambitious graduates to our business. Our long-standing graduate training scheme also enables us to contribute to the achievement of the 'UAE Vision 2021' goal of harnessing the full potential of the UAE's human capital.”

Mr Kalban joined EGA as a graduate trainee in 1985.

Abdulaziz Ibrahim Alsafran, a graduate trainee in the potlines at EGA’s aluminium smelter at Jebel Ali, who studied Mechanical Engineering at Dubai Men’s College said: “The graduate trainee program at EGA has opened my eyes to new opportunities and given me room to grow whilst supporting the development of our country. Working in a challenging area like the potlines, I’ve had full support from my management and fellow colleagues to overcome whatever obstacle comes my way and focus my energy towards learning and improving myself both personally and professionally.”

Dalal Mustafa, who studied at University of Oregon and is now a graduate trainee in the Human Capital department at EGA, said: “The Graduate Trainee programme here at EGA is a great opportunity to discover myself more. It has also helped me paint a picture of who I want to become and what I want to accomplish in the future. The training we get, the workshops and the effort invested in us, proves what this company stands for and believes in - us.”

More than 40 per cent of those holding the top 250 positions in the company as well as more than a third of the 1,800 people in EGA’s supervisory positions and above are UAE Nationals.

EGA aims to Emiratise 40 per cent of in-focus positions, or positions that can feasibly be Emiratised, by 2020.

On a like-for-like basis, EGA already has one of the highest rates of Emiratisation of any major company.