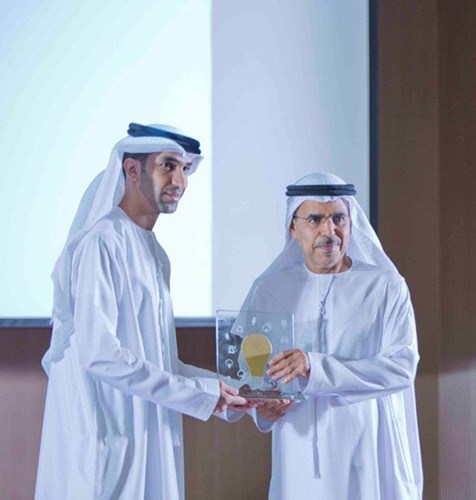 United Arab Emirates, 02 October 2017: His Excellency Dr. Thani Ahmed Al-Zeyoudi, Minister of Climate Change and Environment of the United Arab Emirates, and business leaders today attended an event held by Emirates Global Aluminium on re-using industrial wastes. The event was held under the Ministry of Climate Change and Environment’s ‘UAE Toward Cleaner Production’ initiative to reduce UAE industry’s impacts on the environment and improve its global competitiveness.

Last year EGA supplied over 37,000 tonnes of spent pot lining to UAE cement plants, more than its average annual production. For cement plants, spent pot lining is a source of energy and refractory materials which survive high temperatures and become part of the cement and reduces the requirements for fresh natural resources including quarried rocks and fuel.

Under UAE Vision 2021, the UAE Government wants to ensure sustainable development whilst preserving the environment. One measure of success is the proportion of waste that is treated including through recycling.

H.E. Dr. Thani Ahmed Al-Zeyoudi said: “We are very proud of the remarkable achievement of EGA and its cement industry partners. They have set an example of how industries can work together to make waste productive rather than a problem. With creativity and cooperation, one industry’s waste can be another industry’s feedstock. This will benefit our industries and help preserve our environment while strengthening the global concept of circular economy.”

Abdulla Kalban, Managing Director and Chief Executive Officer of EGA, said: “All industries produce materials that we currently call ‘wastes’. If we think differently, in future there will be no such thing as waste, just by-products with other uses. In the longer term everything is recyclable. We just need to find the right recycling solution.”

The event also witnessed an innovation lab to explore innovative ideas for sustainable consumption and production, engaging materials manufacturers as producers, and construction and real estate companies as consumers.

The global aluminium industry produces over 1 million tonnes of the waste, spent pot lining, each year according to industry experts. Much is stored indefinitely, and outside the UAE some is even sent to landfill.

EGA has adopted a recycle-reuse-reduce philosophy to minimise waste generation and has an on-going aim of zero process waste to landfill.

Over 80 per cent of the waste EGA generates at its Jebel Ali smelter is now recycled, as is over half of the waste from its smelter at Al Taweelah.

Earlier this year, EGA became the first Middle East-headquartered aluminium company to join the Aluminium Stewardship Initiative, a global programme to foster greater sustainability and transparency in the aluminium industry.

In close coordination with the Ministry of Climate Change and Environment and the Prime Minister’s Office, EGA completed in February a Government Accelerators project to reduce nitrogen oxides emissions from its power plants in 100 days. Within this short period, EGA managed to reduced its NOx emissions by 16%, beyond the 10% target of the Accelerators. This is equivalent to removing 450,000 cars from the UAE’s roads.

EGA is the largest industrial company in the UAE outside oil and gas.