EGA and Arkan to test aluminium by-product in cement plant, improving environmental performance of both companies

Global aluminium industry produces over 1 million tonnes of spent pot lining every year according to industry experts, much kept in indefinite storage. Agreement is a further step for EGA towards re-using all spent pot lining in the United Arab Emirates. 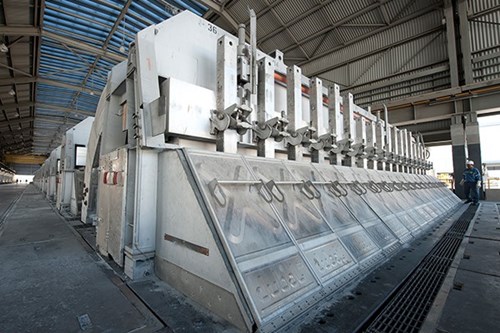 EGA and Arkan to test aluminium by-product in cement plant, improving environmental performance of both companies

United Arab Emirates, 14 March 2017: Emirates Global Aluminium, the largest industrial company in the United Arab Emirates outside oil and gas, and Arkan, a leading building materials company, have agreed to test the use of a by-product of aluminium smelting in Arkan’s cement plant in Al Ain, improving the environmental performance of both companies.

EGA is to provide spent pot lining to Arkan for joint tests of its suitability for use as feedstock for Arkan’s cement plant. This will not only reduce storage in the UAE, but is also expected to reduce Arkan’s energy needs and requirement for quarried rock.

EGA has supplied spent pot lining to other UAE cement plants since 2010 for use as a feedstock.

Abdulla Kalban, Managing Director and Chief Executive Officer of EGA, said: “Many in the aluminium industry see spent pot lining as a problem, but we see it as an economic and environmental opportunity. Using spent pot lining in cement manufacturing is a win-win for both industries and for the country, and contributes to achievement of the economic diversification vision of the UAE.”

Abdulaziz Asad, Chief Operating Officer of Arkan, said: “EGA’s spent pot lining should reduce both our costs and energy needs, delivering business value and improving our environmental performance. This project is in line with our strategy of exploring alternative fuels and feedstocks and we look forward to success in the tests.”

Spent pot lining consists of carbon which burns in a cement kiln and reduces the requirements for other fuel, and refractory materials which survive the firing process and become part of the finished cement.

Arkan has operated a new cement plant in Al Ain since 2014 and is 51 per cent owned by SENAAT, a company of the Government of Abu Dhabi. The remaining 49 per cent of Arkan is owned by UAE Nationals with shares traded on the Abu Dhabi Stock Exchange.