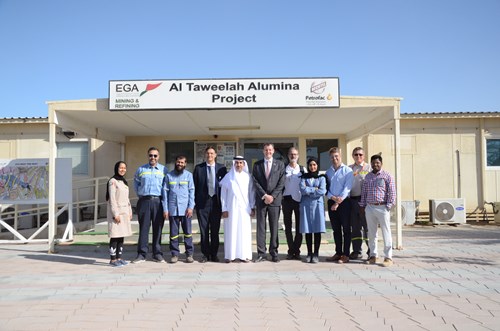 Hatch, a global engineering company based in Ontario, Canada, has reached 2.6 million man-hours without a lost time incident as it builds the power and steam section of the project. This is equivalent to one person working more than 1,000 years without an incident.

Hatch has more than 1,600 people working on its portion of the project, which involves installing a new gas turbine and two heat recovery steam generators at EGA’s Al Taweelah power plant and connecting them to the new alumina refinery.

Unlike most of the construction work for the Al Taweelah alumina refinery, which is being conducted on a greenfield site nearby, much of Hatch’s work is taking place within EGA’s existing operations which increases the engineering challenge for the contractor.

Ambassador Husain was briefed by EGA’s management on the company’s long-standing relationship with Canada.

EGA has awarded over $940 million in contracts to Canadian companies in competitive tenders over the past decade.

Export Development Canada, the country’s export credit agency, is also one of the largest providers of finance to EGA.

Ambassador Husain said: “EGA is a national industrial champion in the UAE. Canadian companies have a long track record of successfully bidding for important contracts with EGA, and I am pleased to have the opportunity to congratulate Hatch on their good performance in delivering their work on the EGA’s new alumina refinery.”

Abdulla Kalban, Managing Director and Chief Executive Officer of EGA, said: “The competitiveness of Canadian companies means that they are amongst our most important partners. Safety is always our top priority so I extend my gratitude to Hatch for their outstanding performance so far in delivering a challenging project to the highest safety standards.”

Once full production is achieved, Al Taweelah alumina refinery is expected to produce 2 million tonnes of alumina per year, enough to meet 40 per cent of EGA’s alumina requirements and helping secure the UAE's supplies of this vital raw material for the aluminium industry.

Alumina is the main feedstock for aluminium smelters.