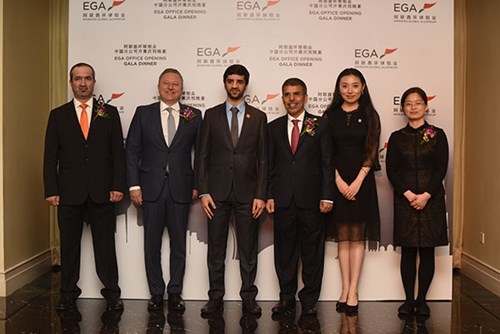 The office in Shanghai of EGA’s wholly-owned Chinese subsidiary will source raw materials and other supplies in China. EGA has procured over $500 million of supplies from China over the past two years.

The office will also deepen commercial ties by developing sales opportunities for bauxite from EGA’s under-development mine in the Republic of Guinea.

Abdulla Kalban, EGA’s Managing Director and Chief Executive Officer, said: “China is already a substantial source of raw materials and supplies for EGA, and we expect the importance of China for our business to grow in the coming years.”

The UAE is strategically situated in West Asia, an area of focus for China under its ‘Belt and Road’ initiative which aims to revive ancient Silk Road trading links. China has been the UAE’s second largest trading partner since earlier this decade.

Bauxite is the ore from which aluminium is derived. China is the world’s largest bauxite importer and a major aluminium producer. Industry experts believe global demand for high-quality bauxite, particularly in China, will grow significantly over the next decade.

On completion, EGA’s bauxite mine in Guinea is expected to ramp up to produce 12 million tonnes of bauxite per year. The development of the mine and associated export facilities is the largest greenfield investment in Guinea in four decades.

Guinea has around 7 billion tonnes of bauxite resources, over a quarter of the global total. Guinean bauxite is amongst the highest quality worldwide. EGA’s concession in Guinea contains more than 1 billion tonnes of high quality bauxite.