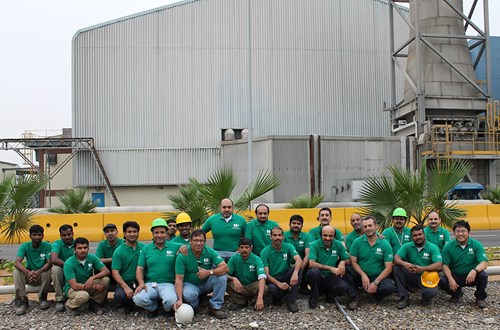 United Arab Emirates, 17 March 2016: On Saturday 19 March 2016, the region’s largest primary aluminium producer Emirates Global Aluminium (“EGA”) will join forces with the global community to tackle climate change by switching off non-essential lights and equipment at its business premises for one hour at 20:30 to mark Earth Hour. Employees have also been encouraged to mark the event in their personal capacity, at home. Direct participation in Earth Hour at EGA’s Jebel Ali Operations from 2008 to 2015 has saved 25.04 MW (equivalent to 12,520 kg CO2).

“EGA is passionate about supporting important global causes by protecting the environment and contributing meaningfully to the communities where we operate is among EGA’s core values,” says Abdulla Kalban (MD & CEO: EGA). “We act as guardians of the environment and consider this an investment in helping us achieve our aspiration for a better future. Earth Hour is a perfect opportunity to encourage positive behaviours from all EGA employees, customers, suppliers and contractors and thereby build a more sustainable environmental culture.”

To drive awareness and engagement among EGA employees, attention has been focused on Earth Hour this week. A campaign with calls-to-action driven through posters, emails and SMS reminding all employees to participate in Earth Hour culminated today, Thursday 17 March, with 300 employees wearing Earth Hour t-shirts and employees being reminded to turn off non-essential lights and office equipment at the end of their shift; as well as to do the same at home for Earth Hour itself.

Since March 2015, EGA has pro-actively supported the “Beyond Earth Hour” initiative by holding an Earth Hour on the last day of every month. The savings achieved from March to December 2015 amounted to 96,971 kWh, equivalent to 40,189 kg CO2.

Also in support of “Beyond Earth Hour”, the EGA Green Life recycling campaign is being refreshed this year to further promote recycling habits within EGA’s premises. The Green Life campaign began in Dubai Aluminium (“DUBAL”, also known as EGA Jebel Ali) several years ago and is being introduced for the first time at Emirates Aluminium (“EMAL”, also known as EGA Al Taweelah). As part of the campaign, 149 recycling bins for plastic, paper, aluminium cans, glass, cartridge, batteries and e-waste have been placed in parking lots, canteens and buildings at both sites to give easy access to employees to recycle, not only in the offices but also to bring their recyclables from home.

In addition, over the last three years, EGA Jebel Ali has planted 1,300 trees that will reduce CO2 emissions by 28.3 tonnes per year.