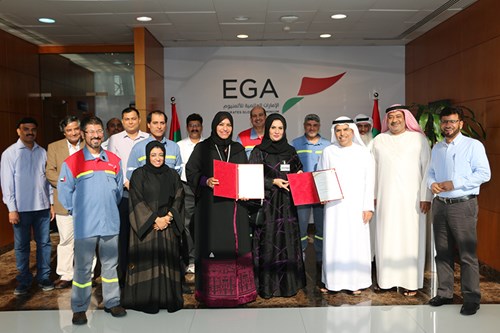 United Arab Emirates, 01 March 2016: The commitment of Emirates Global Aluminium (“EGA”) to continual improvement and standardisation has led to the accreditation of the organisation’s Laboratories to ISO/IEC 17025:2005 (General requirements for the competence of testing and calibration laboratories), in the field of Metallurgical Testing. The certificates were presented to Abdulla Kalban (MD & CEO: EGA) by the Director of Dubai Accreditation Centre (“DAC”), Amina Ahmed Mohammed, on 18 February 2016, in the presence of EGA senior management and core implementation team members.

Commenting on the accreditation, Kalban said “Currently, the standardisation of best practices is one of the key elements that brings measurable value to EGA’s operations. It reflects EGA as a strong brand by delivering consistency in quality of the products manufactured at both our operational sites, in Jebel Ali and Al Taweelah respectively. This accreditation is an important milestone for EGA’s Metallurgical Testing activities, as it attests to our competency levels.”

The process of implementing the standard’s requirements at EGA started with the EGA corporate ambition to maintain a competitive edge. ISO/IEC 17025:2005 is a quality system that is recognised internationally, and contributes directly to quality control of EGA’s products. It enhances the reliability of testing and measurement systems, processes and results as it requires adherence to demanding technical requirements. In addition, it enhances the confidence of EGA’s customers as it is one of the specifications indicated in automotive standard ISO/TS 16949 and further strengthens EGA’s quality management systems.

Currently EGA’s Laboratories are in the process of evaluating the Optical Emission Analysis test for the final product. Future plans include extending the scope of accreditation to include other fields of testing such as raw materials, process materials, water, and oil.