Aluminium giant committed to improving educational environment in the UAE 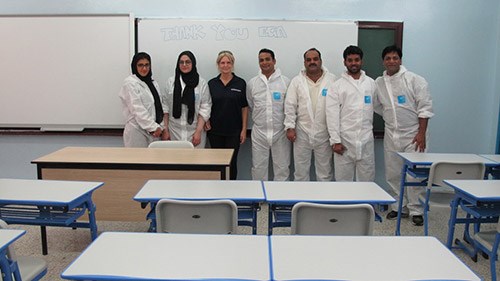 Aluminium giant committed to improving educational environment in the UAE

United Arab Emirates, 12 June 2016: Inspired by the saying “Charity begins at home” and coincident with the holy month of Ramadan, a group of 16 employees from Emirates Global Aluminium (“EGA”) renovated two classrooms in the boys’ wing at National Charity School, Dubai on Sunday 5 June 2016. As the largest primary aluminium producer in the region and among the top five in the world, EGA is passionate about supporting important causes in the United Arab Emirates (“UAE”) community – with the country’s youth being a key focus area.

National Charity School, a private non-profit school established in Garhoud in 1983, provides education for boys and girls from kindergarten to grade 12. The renovation project – which involved using EGA-sponsored materials to paint the classroom walls, doors and frames; scrape windows for new tinting; plus assemble and install classroom furniture and furnishings – aimed to improve the learning environment for the students, thereby helping them make the most of their education programme. New air-conditioning units were also installed.

Commenting on the initiative, Khalid Essa Buhumaid (Senior Vice President, Government Relations) said, “EGA invests the company's time, financial resources and expertise to support a broad range of community-oriented events and activities that contribute to the socio-economic development of the UAE. We believe that education, in particular, is fundamental for the nation’s sustained growth. By enhancing the education environment, we are supporting the UAE’s Vision 2021 National Agenda to develop a first-rate education system in the country while simultaneously playing a role in encouraging students to become valuable members of our society.”