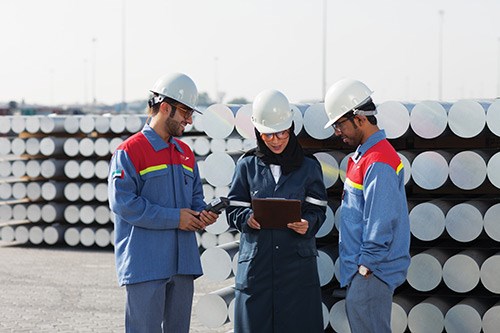 United Arab Emirates, 24 July 2016: Emirates Global Aluminium (“EGA”) – the UAE’s industrial champion and one of the world’s top five primary aluminium producers – has been named one of the top rapidly globalizing companies in the Boston Consulting Group (“BCG”) 2016 Global Challengers report. This is EGA’s second citing, having also been included in the 2014 edition of the report.

The BCG Global Challengers report focuses on the innovative business models, strategies and challenges arising from emerging markets; and is the outcome of an analytical study into how the companies in the report are performing. As with prior editions, the BCG Global Challengers 2016 report identifies the top 100 companies that are vying for leadership of key industries and driving global economic growth.

“EGA’s repeat inclusion in the report recognises the impact of our global reach in promoting the UAE across the world, as well as our substantial contribution to the nation’s economic diversification strategy to reduce dependence on the energy sector,” says Abdulla Kalban (MD & CEO of EGA), explaining that EGA’s 2.4 million tonnes per annum (“tpa”) production capacity makes the UAE the world’s fourth largest primary aluminium producer. “Indeed, the value-add of the aluminium industry to the UAE manufacturing sector is enormous in terms of GDP contribution, exports and employment opportunities,” he adds.

The BCG report states that home-grown global challengers like EGA know how to win in volatile and uncertain times. Specific mention is made of their resilience during global expansion despite slowdowns in macroeconomic growth, drops in commodity and currency prices, the crash of equity markets and the rise of global geopolitical risks.

“This is a valued accolade, given that the global aluminium industry has been facing substantial challenges including global macro-economic uncertainty, growth slowdown in China, a stronger US Dollar and falling oil prices,” says Kalban. “Having been officially incorporated in Q1 of 2014, EGA is a young business. By drawing on the 40-year legacy provided by our operating assets while continuing to invest in innovation and talent we have achieved sustained success, to the benefit of our stakeholders and the UAE as a whole.”

EGA also owns Guinea Alumina Corporation (“GAC”), which is developing a 12 million tpa bauxite mine in Guinea, West Africa; and Al Taweelah Alumina, which is currently developing a 2 million tpa alumina refinery in the UAE. These upstream investment projects, once complete, will not only consolidate EGA’s position as a vertically integrated business, but also secure critical resources for EGA’s midstream operations. In addition, EGA has plans for significant local growth and international expansion.

EGA is one of three UAE companies included in the BCG 2016 Global Challengers report, the others being Etihad Airways and Etisalat.