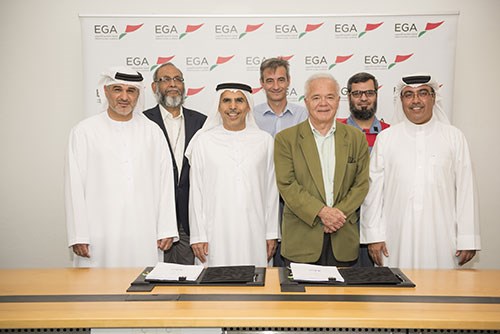 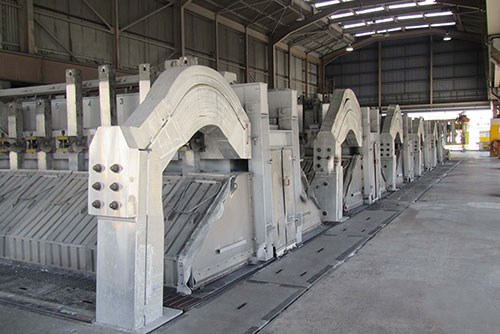 United Arab Emirates, 23 February 2016: Recognised in the global aluminium industry as a valuable provider of smelting technologies, Emirates Global Aluminium (“EGA”) this week concluded the sale of its in-house developed, proprietary DX+ Ultra Smelting Technology to Aluminium Bahrain BSC (“Alba”) for the latter’s Line 6 expansion project, marked by the signature of the associated Technology Licence Agreement. The sale marks a major milestone for EGA and the UAE. Not only is this the first sale of EGA’s advanced, state-of-the-art technology; but also the first such sale outside the UAE – the combination affirming the country’s place among the world’s innovation-driven nations.

“Since inception in 1979, EGA has been committed to continuous innovation in the aluminium smelting process so as to produce the world's best quality aluminium products while achieving maximum operating efficiencies,” says Abdulla Kalban (EGA Managing Director & Chief Executive Officer). “Our culture of value-adding innovation provided both the foundation and inspiration for ongoing in-house development of enhanced proprietary smelting technologies that deliver higher production volumes, improved current efficiencies and environmental benefits; and the industrial-scale installation of our technologies in EGA’s smelter operations in the UAE. We are very proud of the results of our technology development efforts, and extremely pleased that the performance capabilities of our proprietary technologies have been recognised externally – as evidenced by Alba’s selection of DX+ Ultra Smelting Technology.”

DX+ Ultra Smelting Technology is the next generation version of EGA’s proven DX+ Smelting Technology, which was developed at EGA subsidiary Dubai Aluminium (“DUBAL”, also known as EGA Jebel Ali). DX+ Smelting Technology cells built in the Eagle pilot line at the DUBAL plant began operating at 420 kA in 2010, with the amperage being increased in successive increments to 450 kA by the end of 2013. The exceptional performance capabilities of DX+ Smelting Technology have since been demonstrated at EGA subsidiary Emirates Aluminium (“EMAL”, also known as EGA Al Taweelah), where 444 DX+ cells were installed in the 1.7 kilometre-long EMAL Potline 3 constructed during EMAL Phase II. EMAL Potline 3 was fully commissioned by mid-2014 and has been operating steadily at 455 kA since 11 March 2015 (it is ultimately expected to operate at 460 kA in the near future). EMAL, which uses EGA smelting technologies throughout its smelter operations, is currently the largest single-site primary aluminium producer in the world, with a capacity of 1.4 million tonnes per year.

Research and technology development have been hallmarks of EGA since the inception of the business. Considerable resources – both human intellect and financial investment – have been dedicated to these activities over the years. DX+ Ultra Technology is the result of the latest efforts to develop lower CAPEX and lower energy, high amperage reduction cells. Alba initially selected DX+ Smelting Technology in December 2012 for its Line 6 Bankable Feasibility Study; and confirmed the selection when the project go-ahead was announced in early-June 2015. The decision to upgrade to DX+ Ultra Smelting Technology followed on the strength of the demonstration cells’ performance.

The multi-billion dollar Alba Line 6 expansion project will entail a new 1.5 kilometre long potline that will boost Alba’s annual production by an additional 540,000 tonnes per year. Construction of the new Line 6 is expected to start in the first half of 2016, with first hot metal scheduled for early 2019.