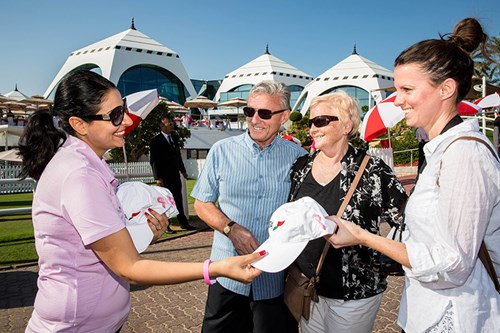 United Arab Emirates, 04 February 2016: The longest-standing Sponsor of the Omega Dubai Desert Classic, Emirates Global Aluminium (“EGA”) will pro-actively support ‘Pink Friday’ at this year’s tournament by distributing 2,000 caps to spectators and media representatives as they arrive to watch the golf on Friday 5 February. Introduced to the tournament several years back, Pink Friday is marked by encouraging all golfers, caddies, officials and spectators to wear pink to help raise awareness of breast cancer – thereby sending out a strong message of support for the cause.

“As a concerned and responsible corporate citizen, EGA is honoured to support the Pink Friday initiative. Breast cancer affects many people in our local community and we acknowledge our responsibility to support efforts to increase awareness of the disease,” said Abdulla J M Kalban (MD & CEO: EGA). “EGA is passionate about supporting a range of causes in the community, particularly health-related ones. Pink Friday at the Omega Dubai Desert Classic aligns with the internal CSR activities that EGA conducts every October, to raise breast cancer awareness among our employees.”

During the annual breast cancer month, EGA hosts a Pink Day during which health screening is offered to its female employees and a full programme of events is organised to highlight the importance of early detection. As part of this campaign, EGA also runs several fund-raising activities to raise money for UAE-based breast cancer charities.