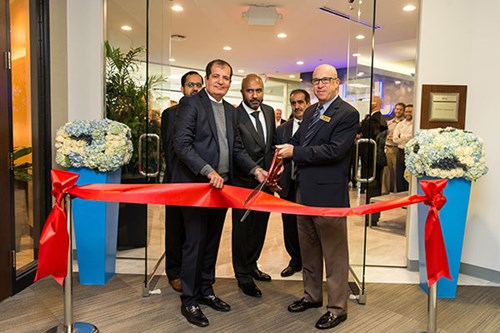 United Arab Emirates, 28 December 2016: Emirates Global Aluminum (EGA), one of the world’s leading primary aluminum producers and the largest industrial company in the United Arab Emirates (UAE) outside the oil industry, has announced the opening of its new and larger sales office in St. Louis.

EGA’s office expands its presence in the United States, a market it has served for nearly two decades.

The office, which operates under the name Dubal America, coordinates EGA’s work with American customers. EGA has supplied aluminum in the United States since 1998 through a partner agency in St. Louis.

In 2014, in order to meet growing U.S. demand, the company opened its first official office where it employed a team of four. In just two years, the company outgrew its 3,500 sq. ft. facility and the space needed for a workforce that is now five times the size.

The company’s new and larger space, consisting of 7,000 sq. ft., will accommodate its workforce of 25 as well as provide space for future growth. In the last year, EGA has added nearly nine professional-level positions to its team and nearly doubled the volume of business in just the past few years.

Walid Al Attar, EGA’s Chief Marketing Officer, said: “Operating from a central geographical location is crucial for our business in the United States. We provide specialized, high purity and high quality aluminum products to customers on every coast and we need to be able to connect quickly and efficiently. St. Louis has met our needs and after only a few short years, positioned us for growth. In order to meet growing U.S. demand we’ve increased our workforce and doubled our business volume. We’ve been able to do so much more from right here in St. Louis with a talented workforce that is unmatched elsewhere. You couldn’t give us a reason to leave Missouri.”

The company’s $1.3 million move secures EGA’s space on the 6th floor of the City Place Three building through a five year lease.

The new space is located in Creve Coeur and features a gym and game room; amenities that help attract and retain talent.

EGA’s US office administers contract negotiations, sales, and manages supply and deliveries for the aluminum manufactured at its plants in Dubai and in Abu Dhabi.

EGA is the fifth largest producer of aluminum in the world with more than 300 global customers.

EGA in the United States is a supplier of raw aluminum to Tier 1 customers that produce aluminum products used in the aerospace, building & construction, automotive and many other industries and applications.

Many of these Tier 1 customers are U.S. exporters of high technology manufactured goods.

Missouri Governor Jay Nixon led a trade mission recently to the UAE that met with Mubadala - one of EGA's shareholders.

Gov. Jay Nixon said: “To continue moving our economy forward, we are always looking outside our borders for prospects that can make a difference for Missouri families. Exporting and international trade have always been top priorities during my eight years as Governor and as a result, we are increasing Missouri’s exposure to new customers and businesses on a global scale and opening doors for job creation back home. EGA’s decision to grow in St. Louis is a reflection of Missouri’s pro-business environment and of our versatile workforce. We congratulate the company on its growth and look forward to its continued success in the Show-Me State.”