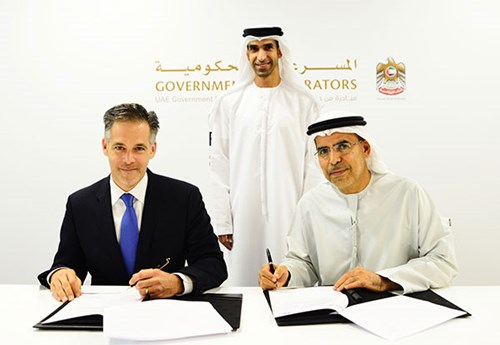 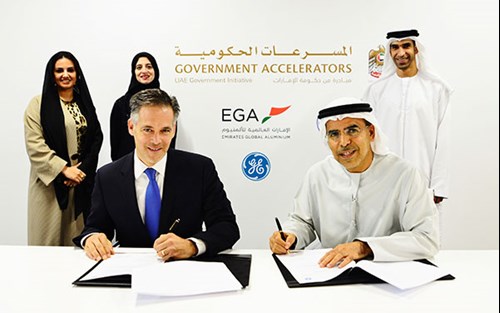 United Arab Emirates - Dubai, 21 December 2016: Emirates Global Aluminium, one of the world’s largest primary aluminium producers and the largest industrial company in the UAE outside the oil and gas industry, and GE Power today signed a Memorandum of Understanding to work together on a 100-day programme to reduce EGA’s NOx emissions under the UAE Government Accelerators program.

The signing was witnessed by HE Dr. Thani Ahmed Al-Zeyoudi, Minister of Climate Change and the Environment and took place at the Government Accelerators headquarters in Emirates Towers in Dubai.

EGA, with GE, is working in partnership with the Ministry of Climate Change and the Environment to secure tangible goals relating to the environment. The project is one of the first five under the Government Accelerators programme launched by His Highness Sheikh Mohammed bin Rashid Al Maktoum, UAE Vice President and Prime Minister and Ruler of Dubai.

EGA’s goal is to reduce its NOx emissions by 10 per cent by the end of February. NOx is also emitted by motor vehicles and contributes to poor air quality. Success in the project will improve air quality by the equivalent of removing 280,000 cars and their emissions from the UAE’s roads.

Improving the air quality index to have clean air 90 per cent of the time is one of the national objectives set in UAE Vision 2021, with NOx one of four main air pollutants measured.

NOx is emitted by EGA’s power plants which produce electricity for use in aluminium smelting, an energy intensive industry. EGA is the third largest electricity generator in the UAE after DEWA and ADWEA. EGA’s newer power plant, Al Taweelah, has amongst the lowest NOx emissions of any power plant in the Middle East.

Under the MoU, GE will work with EGA to implement an accelerated program to minimize NOx emissions at EGA’s power plants in Al Taweelah and Jebel Ali, while also contributing to improving further the operational efficiency of the two plants and reduce fuel usage.

Abdulla Kalban said: “This MoU is an important step in meeting EGA’s ambitious goal under the Government Accelerators programme. With the advanced digital solutions that GE Power will introduce in our plants, we can contribute to improved air quality and help achieve a 100 per cent completion rate for the National Agenda goals.”

Joseph Anis said: “This agreement with EGA, a world-leader in the aluminum industry, underlines GE’s technological strengths in supporting the industry in achieving not just enhanced levels of productivity and efficiency but also contributing to a greener future. With the MoU, we are partnering in the UAE’s National Agenda goals to meet its sustainable development ambitions. To be chosen as a partner in the UAE Accelerator Program with the Ministry of Climate Change and the Environment and EGA is a great honour, and we will deliver on the targets by leveraging the strength of our digital and high-tech solutions.”

GE technologies used will include the supply of water injection packages for the gas turbines deployedat the Jebel Ali plant.

At the Al Taweelah plant, GE will deploy its Fin-Fan software logic modification for up to two units to optimize cooler operation, thereby reducing auxiliary load consumption. Pressure wave cleaning will be provided to improve operational efficiency and reduce emissions.

GE is a long-term partner of EGA and has signed contractual services agreements to ensure the seamless operations of GE’s installed base of turbines at EGA Al Taweelah, one of the largest single-site aluminium smelters in the world. GE has also introduced Advanced Gas Path upgrades at EGA’s Jebel Ali site.