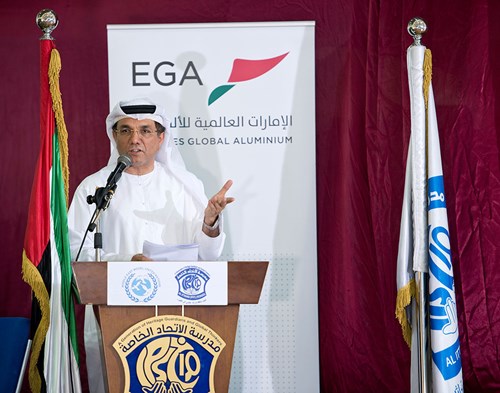 United Arab Emirates, 13 October 2015: As part of its commitment to supporting education initiatives in the UAE, Emirates Global Aluminium (“EGA”) sponsored 150 students to attend the precursor conference of the Middle East Model United Nations (“MMUN”), which took place at the Al Ebdaa Model School and Al Ittihad Private School from 9 to 11 October 2015. The focus of this year’s conference was renewable energy, with students engaging in active debates on the issue.  EGA’s Yousuf Bastaki (Senior Vice President, Major Projects) addressed the closing ceremony of the conference.

“We are fortunate to live in a country where the leadership has not only recognised the importance of clean energy, but is making significant investments in renewable energy projects and setting a precedent for the rest of the Middle East. Renewable energy is now an important global topic and we need to ensure that our region plays a prominent role in global efforts both now and in the years to come.  By participating at this Middle East Model United Nations conference, you have made the first important step towards being part of this global environmental movement … you give me confidence in the future of our environment and our nation,” Bastaki said,

In addition, EGA has sponsored 2,000 students from Al Ittihad Private School, to download the ‘Safeer Al Bee-ah’ app, for which the country-launch on 11 October 2015coincided with the MMUN event. . Designed to raise awareness of energy-saving initiatives among young people, within the context of global climate change, Safeer Al Bee-ah (Arabic for ‘ambassador for the environment) is supported by the United Nations Environment Programme (“UNEP”). Through the application, students will receive customisable information on environment initiatives and will be incentivised by a rewards programme for the duration of the academic year whereby they can collect green points either individually or through their schools. This programme will keep students motivated through on-going prize initiatives, thereby encouraging green habits and conservation.

The MMUN Conference is a simulation of the UN General Assembly and other UN Committees. Students attending the annual events step into the shoes of ambassadors from UN member states to debate current issues on the organisation’s agenda. While playing their role as ambassadors, the student delegates deliver speeches, prepare draft resolutions, negotiate with allies and adversaries, resolve conflicts and navigate the UK conference rules of procedure – all in the interest of mobilising international cooperation to resolve problems that affect countries all over the world.

Commenting on EGA’s support of the MMUN and Safeer Al Bee-ah, Khalid Buhumaid (Senior Vice President, Communication & Government Relations: EGA) said, “As a global business, we feel it is our responsibility to invest in education initiatives that empower future generations. The MMUN is a fantastic programme that encourages young people around the world to be passionate about key global issues. At EGA, protecting the environment is one of our key corporate values. So, we were delighted to share our expertise on renewable energy at the conference and fully support developing an environmental conscience among our youth.”