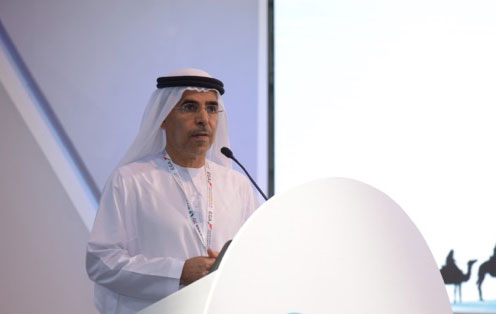 Corporate focus on excellence and innovation at EGA helps position the UAE as a global industrial champion.

United Arab Emirates, 17 November 2015: Innovation is one of the key corporate principles of Emirates Global Aluminium (“EGA”), the region’s largest aluminium producer. Indeed, it is largely through innovation that EGA has been able to sustain and grow its business over the past four decades. Fully supporting the innovation strategies of the leadership of the UAE, the technologies developed in-house by EGA have made the company a respected competitor in the global aluminium industry and helped solidify its position as the nation’s industrial flagship.

EGA’s core operating assets are Dubai Aluminium (“DUBAL” also known as EGA Jebel Ali) and Emirates Aluminium (“EMAL” or EGA Al Taweelah) whose combined production is 2.4 million tonnes per annum, ranking EGA among the five largest primary aluminium producers in the world. From the first day metal was poured at DUBAL in 1979, the company has maintained a commitment to continuous innovation in the aluminium process so as to produce the world’s best quality aluminium products, made-to-order and delivered direct to customers while achieving maximum operating efficiencies.

Commenting on EGA’s innovation philosophy, Abdulla Kalban (Managing Director & Chief Executive Officer: EGA) said, “Business excellence through continuous improvement is built into the corporate culture of EGA. We nurture this philosophy by encouraging innovative thinking so that we can discover more effective ways of working at every level of the business.” He added, “Value-adding innovation has been a tradition since EGA’s inception, with EGA Jebel Ali having been involved in technology development for more than 20 years with 100 per cent UAE-based development.”

Steps have been taken recently to protect EGA’s inventions through applications to patent its proprietary technologies, with nine patents already filed. Since 2014, EGA has worked closely with Takamul – an innovation support programme developed and operated by the Abu Dhabi Technology Development Committee to help Emirati individuals, universities and enterprises in Abu Dhabi and the wider UAE, to protect and commercialise their innovative ideas – and has already received financial support from Takamul for several of its patent applications.

Aluminium production is an energy-intensive industry, such that using less energy during the production process reaps a number of benefits – including lower operating costs and reduced emissions levels. Energy efficiency and the protection of the environment have underpinned EGA’s quest for innovation over the years, which has led to the development of a number of best-in-class technologies. Using these technologies is integral to EGA’s drive to ensure long-term competitiveness in an industry that is sensitive to product quality, costs and increasingly, environmental performance.

Indeed, EGA has gained recognition across the global aluminium sector for its proprietary reduction technologies - DX and DX+ - which rank among the most efficient of their kind. In addition to offering the lowest investment cost per installed tonne of capacity available in the market, DX+ Smelting Technology offers several operating benefits in terms of current efficiency, energy consumption and environmental performance; as well as the added advantage of higher productivity per reduction cell (or ‘pot’).

EGA is currently developing further potline technology, which focuses on recovering heat from pots during the aluminium production process. Dr Ali Al Zarouni (Senior Vice President, Jebel Ali Operations, Technology Development and Transfer at EGA) explains, “We are currently working with partners in Europe to develop a Heat Recovery System which captures the waste heat that dissipates from the potshells in our potlines. The energy captured can then be used to generate electricity or to power cooling systems. The Heat Recovery System has been installed in one of the pots in our testing area and will be incorporated into our future cell design.”

If successful, this will be a major development for the industry, leading to greater optimisation and efficiency while adding to the benchmark-setting credentials of EGA. The technology also makes an important contribution to EGA’s broader sustainability agenda, which includes, among other things, efforts to find alternative energy sources. EGA’s aims are clear – namely to create an aluminium industry that is at the forefront of the UAE’s efforts to diversify its economy beyond crude oil and natural gas sales, while continually reducing the impact of its operations on the environment and its surrounding communities.

To ensure sustained technological development, on-going investments are directed by a dedicated Technology Development & Transfer department at EGA, which has been mandated to innovate continuously, resulting in improved technology and client service. Furthermore, one of the strategic objectives of EGA is to develop a Centre of Excellence in the UAE through research in aluminium application and production technology. Not only will this initiative assist EGA’s existing efforts, but will provide a platform for the innovators of the future.

For the Centre of Excellence, EGA works with local and international universities and academic institutions to develop the company’s innovation projects. To initiate the programme, students are presented with a brief on the objectives and solution required for a project, with representatives from EGA overseeing their progress and guiding them on a technical level. The aim of this initiative is to build a strong knowledge base in aluminium in the UAE and GCC region while promoting the UAE as a leader in technology.

“EGA is a quality-focused and innovation driven organisation that strives for efficiency. The combined strength of DUBAL and EMAL has created a solid platform for technological innovation, and as a proudly Emirati company, we are committed to ensuring a lasting contribution to the UAE and global economies,” said Saeed Al Mazrouei (Chief Executive Officer, UAE Operations at EGA). “Through innovation, we will continue to drive industry standards, helping to shape the future of the global aluminium sector and showcasing the expertise of the UAE to the rest of the world.”

EGA’s innovation focus is in line with the vision of HH Sheikh Mohammed bin Rashid Al Maktoum (Vice President of the UAE and Ruler of Dubai) and HH Sheikh Mohamed bin Zayed Al Nahyan (Crown Prince of Abu Dhabi) for the UAE to be a leader in innovation. In a year when EGA has made further technological developments, the company’s efforts also support the announcement by HH Sheikh Khalifa bin Zayed Al Nahyan (President of the UAE and Ruler of Abu Dhabi) of 2015 as Year of Innovation.