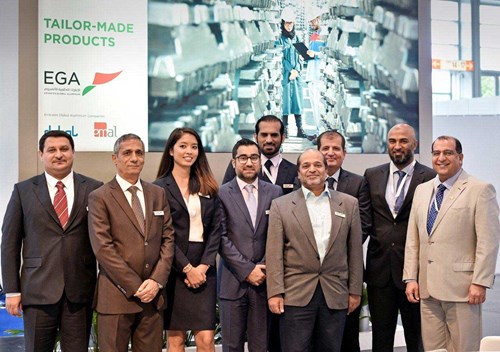 “GIFA is a well-established platform for industry networking as well as showcasing innovations that will shape the future of the sector. It is the largest aluminium exhibition in Europe and the most important trade fair in the world for foundry technology,” says Al Attar. “Given that EGA is one of the largest and leading suppliers of foundry alloys to the automotive industry, the GIFA exhibition offers a strong forum for reach existing and potential new customers in the region – and even farther afield; as well as opportunities to meet with suppliers to the industry. Hence EGA and its subsidiary companies have participated at several GIFA events over the years. Judging by the number of visitors to our exhibition stand and the successful outcomes of the many meetings held with customers and suppliers alike, we achieved our objectives for participating at GIFA 2015.”

Al Attar reiterates that Europe is a key region for EGA, both currently and for the future. “EGA metal has been shipped to Europe since 1996, with consistent growth in volumes over the last 19 years. In 2014, about 23 per cent of EGA’s total annual production was exported to about 24 countries in Western and Eastern Europe – making Europe our second largest market region,” he says. “Looking ahead, the European Union as a whole needs to import approximately 60 per cent of its primary aluminium requirements. This translates into ample opportunity for us to achieve continued growth in sales to Europe.”

Evidencing a deep corporate commitment to the region, EGA has well-established offices in Zurich and Milan; and has developed an extensive transport and logistics infrastructure to facilitate door-to-door delivery of products, which are shipped via about 44 ports across Europe.