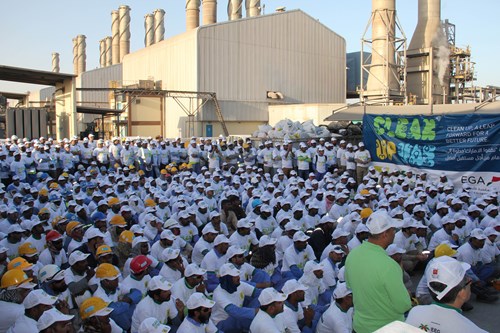 United Arab Emirates, 20 December 2015: Emirates Global Aluminium (“EGA”) has once again participated in the annual national ‘Clean-Up UAE’ campaign, an initiative of the Emirates Environmental Group (“EEG”). Clean-Up UAE was developed to enhance and protect the UAE’s environment through grassroots efforts and spread environmental awareness in the local community. The initiative was rolled out across all seven Emirates from 5 to 16 December 2015 with EGA holding clean-up initiatives at the sites of its operating entities at Al Taweelah and Jebel Ali on 9 and 13 December respectively.

As part of its CSR strategy, EGA coordinates several activities each year to raise the environmental conscience of its employees. A long-standing member of EEG, EGA business has participated in annual Clean-Up UAE campaign since 2010. This year, 1,000+ EGA volunteers collected 2,860 kg of waste, of which some waste was segregated for reusing and/or recycling.

“Protecting the environment and contributing meaningfully to the communities where we operate are among EGA's core values,” said Abdulla Kalban (MD & CEO: EGA). “The Clean-Up UAE campaign highlights how we, as individuals, have a part to play in conserving our local environment. I thank the CSR, Power & Desalination and Waste Management teams at EGA for encouraging our employees to support this fantastic community initiative.”