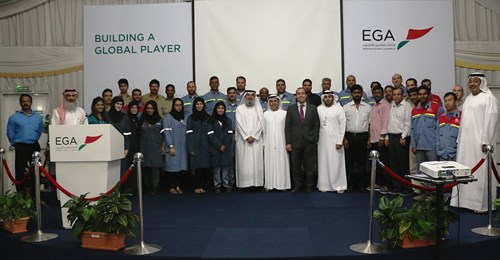 United Arab Emirates, 01 December 2015: In line with the directives of His Highness Sheikh Khalifa bin Zayed Al Nahyan, who declared 2015 the “Year of Innovation” in the UAE; and the launching of Innovation Week  by His Highness Sheikh Mohammed bin Rashid Al Maktoum (Vice President and Prime Minister of the UAE and Ruler of Dubai) which ran from 22 to 28 November 2015, Emirates Global Aluminium (“EGA”) hosted a one-day event at each of its smelter sites in the UAE to promote innovation and the power of creative thinking.  Aligned with EGA’s on-going efforts to ensure continuous improvement throughout its operations, the ‘Innovation, Geared by Ideas’ events – held on at EGA Jebel Ali and at EGA Al Taweelah on 23 and 25 November respectively –  encouraged employee participation in a team-based competition and showcased innovations that have been developed and implemented across the business.

EGA has a well-established reputation for innovation and has been widely recognised for its achievements, regularly participating in international innovation forums and winning numerous international awards. Each of EGA’s 7,000-plus employees is considered an innovator, whose creative thinking abilities give EGA a competitive edge in the industry.

In his opening address at both events, Abdulla Jassem bin Kalban (MD & CEO: EGA) stressed the importance of creativity and employee contribution. “Our ‘Innovation, Geared by Ideas’ event is a celebration of the culture of value-adding innovation that has been a cornerstone of EGA’s successful and sustained growth over the years. Innovation is part of our corporate DNA – it defines who we are and how we operate – and has been pivotal to us securing a leadership position in the global aluminium industry,” he said.

This philosophy is echoed in the EGA’s mission statement, which highlights the importance of innovation in realising the corporate vision to make a lasting contribution to the UAE and global economies. Fully supporting the innovation strategies of the UAE’s leadership, the technologies developed in-house by EGA have made the business a respected competitor in the global aluminium industry and helped solidify its position as the nation’s industrial flagship.

UAE Innovation Week is a nationwide event in support of the 7-year integrated UAE National Innovation Strategy, launched in October 2014, which aims to create a diverse knowledge-based economy and establish the UAE as a world leader in the field.