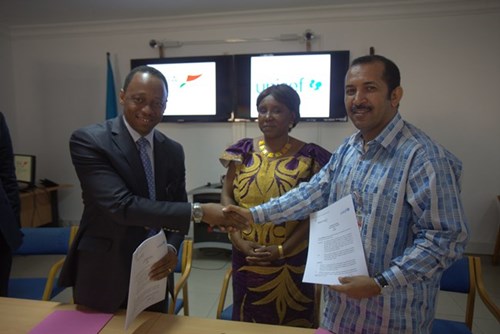 A symbolic presentation ceremony was held in the afternoon of Monday, 23 June at the UN warehouse in Conakry. The ceremony was jointly chaired by Guinea’s Minister of Social Action and the Minister of Health, Colonel Dr. Remy Lama and Her Excellency Sanaba Kaba, Minister of Social Action. GAC was represented by CEO William Morrell and Corporate Affairs General Manager Mamady Youla. UNICEF was represented by Country Director Mohamed Ag Ayoya, along with senior members of his staff.

Mr Ayoya opened the ceremony and saluted what he described as a diligent and prompt response from GAC to help fight Ebola in Guinea. He added, “Good health is a right for the people and an obligation for us all.”

Mr Morrell then commented that his company was thankful for the opportunity to contribute to eradicating this devastating disease. He said that the only way to stop the propagation of the virus was through education and providing the right information on basic hygiene practices to the people. This was the reason for GAC collaborating with UNICEF to attain this goal, especially as UNICEF has proven experience not only in Guinea but also around the world. “At EGA we believe education is the key to success for every society, which is why it is one of our key objectives,” he added. Mr Morrell concluded by saying that GAC is committed to and would continue supporting the people of Guinea through education.

The ceremony was wrapped up with closing remarks by Minister Lama. Speaking on behalf President Conde (the President of Guinea) and his Prime Minister, Colonel Lama expressed the thanks of Guinea’s government for the meaningful and highly appreciated gesture by GAC toward the people of Guinea.

Members of Guinea’s press, public and private were also present at the ceremony.