Aluminium is produced in reduction cells, which are tanks the size of small swimming pools.

Electricity is passed through the cells and electrolysis, an electrochemical process that separates aluminium oxide into aluminium atoms and oxygen atoms, takes place. The process requires intense heat.

The technology challenge is to increase the productivity of the cell, minimise energy consumed per tonne of aluminium produced, and minimise capital and operational costs.

Since 1990, EGA’s technology development has more than doubled the size of cell that is technically and commercially viable. Our technology development, and earlier work started in 1980, has reduced the amount of electricity required to produce each tonne of aluminium by 37.5 per cent, improving both cost and environmental performance.

EGA’s latest technology, DX+ Ultra, has more than double the productivity of our first D18 technology developed in 1990 from the original technology used to build our Jebel Ali smelter.

The first generation of our DX Technology was developed in 2006 at EGA in Jebel Ali.

We installed DX Technology in a dedicated industrial 40-cell potline in 2008. The cells began operating at 340 kA and now exceed 420 kA.
DX Technology is also used in the 756 cells of the first phase of our smelter at Al Taweelah (Potlines 1 and 2), which now operate at near 420 kA.

DX+ Technology is based directly on the proven, inherently robust DX technology.

It offers similar advantages in terms of current efficiency, energy consumption and environmental performance, with the added advantage of higher productivity at a lower capital cost per installed tonne of capacity.

Five DX+ cells built in the Eagle pilot line at Jebel Ali began operating at 420 kA in 2010. The amperage was increased in successive increments to 450 kA by the end of 2013.

We used DX+ Technology in the second phase of our smelter Al Taweelah, Potline 3, which has 444 cells. These cells began operating stably at 440 kA, and have since reached 465 kA.

In 2018, we welcomed the start-up of Aluminium Bahrain's new potline 6, which was built using EGA's UAE developed technology. 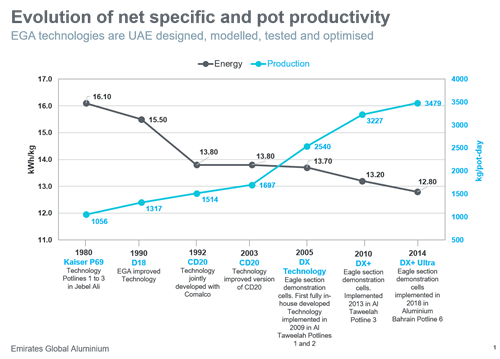